Stefan Daniel has continued to challenge himself since he first broke out onto the international stage in 2013 when he won a bronze at his first paratriathlon world championships as a sixteen-year-old. Since then, Daniel has gone on to become a World Champion in 2015, 2017, 2018, 2019 and win a silver medal in Rio in 2016.


As a Paratriathlete and USport cross-country champion, Daniel has shown his ability to compete across numerous events.


“My main motivation is to help para-sport grow and legitimize and show that para-athletes are just as impressive as any other athlete,” Daniel said. “I think if I can compete against able-bodied athletes with a disadvantage, I think that would be really cool [....] I hope I can inspire some kids, and I think it’s something that will really keep me motivated and happy.”

Training for a triathlon means training for all three disciplines: swimming, biking, and running. Triathletes train and compete for different event distances. Daniel explained similarities in how he would prepare for able-bodied racing.

“When I do start potentially dabbling in some longer stuff or able-bodied racing, my training will probably change a bit,” Daniel said.

“Para-racing and the half-Ironman are both non-drafting, so the training wouldn’t be crazy different. It would just be more volume.” 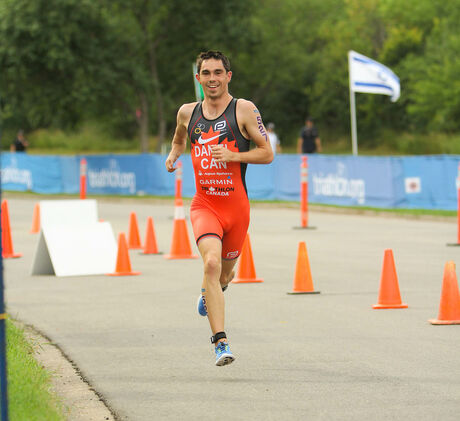 Due to the COVID-19 pandemic, the Olympics and the Paralympics were postponed to 2021. Daniel did not let the news distract him from his goal. Quick to adapt, Daniel focused on the parts of his race that he could work on despite provincial restrictions.

“When it first happened, gyms and pools were closed down, so I just focused on what I could control,” Daniel explained.

“I spent a lot of time biking, which was definitely my weakness, especially in Rio [....]

I was coming off of a navicular stress fracture in the fall and I was still building my running back up, so it was actually nice to have the extra time.”

Looking beyond Tokyo, Daniel plans to go back to the University of Calgary to finish his business degree.

In the fall, he will also be competing for the school’s varsity cross-country team. Beyond that, Daniel and his coach will discuss what training and racing will look like into 2022.

“I’m looking forward to a bit of a break. It’s been stressful but exciting at the same time. After Tokyo I’ll relax for a bit and go back to school [....] I think I’ll definitely want to start some half-Ironman racing, maybe some International Triathlon Union (ITU) racing, some short distance stuff, and maybe some road racing.

I have options, which is good.”Despite lots to look forward to in the future, Daniel’s focus is entirely on Tokyo. His excitement for the Paralympics has only grown since the postponement of the Games in 2020.

“I’m ready now and I’m excited to get this show on the road,” Daniel said. “It’s been the longest build-up to a race ever, so I’m feeling ready for it.”